i fucked up!!!! will admit to it. that was my fault!!!! but do i give a shit? not really. honestly, this is fine. they're fine. in a way, i'm kind of glad it was this universe where they slipped through. where i might've... i don't know, it's got to be some aftermath shit from the last mission outside this dimension. but that's okay. i got to talk to my friends. and katie... katie's okay. i don't think i can trust them yet, though. besides the interest in penny and junk, they don't seem any different than any other universe... which could mean........ auuuuuugh. i don't want to not believe in them. but... i can't. not unless i know they'll be okay, and that won't happen again. i won't let it. also note: fucking CONNOR. i should've just killed him. guh.

i know you're fucking reading this, lansing. annalise is dead. get that through your fucking skull. nothing. you do. will bring. her back. stop. asking. me. to. find. her.

i wish i didn't see her cry like that.

...counting down the months. it's almost time. would it be fucked up of me to go see them moving in? having no idea that in just a few short weeks, i'd be gone forever? well. not forever. but gone.

i don't think anyone's ever going to really read this so i'll say it. i want to be dead. i wish i was dead. i wish this never happened. i wish at least ONE other universe had me in it, so i just... wouldn't be the only one.

i got stabbed today. in 8490X. that was what, the sixth attempted murder this year? i haven't been documenting here, sorry. those are for the "official laboratory records" under "ceo lansing's use" or blahblahblah. and unfortunately for me, i can't FUCKING. DIE. !!!!!!! how annoying is that. i got stabbed, and got zooped back to the lab, fully healed. again. what do i have to fucking do to get murdered for real.

cawsie's alive in countless other universes. i don't understand how she could disappear entirely from this one.

one year left. one year left, and things are going to change forever. i don't think a timeloop starts--nadia says it'd be impossible, considering what i am. the Anomaly. the one and only kendra smalls in a billion universes in every direction. this fucking sucks. i'm not even the only anomaly, which would be a lot more comforting if my only companions weren't fucking penny the immortal hellhound and the minute men. speaking of, that asshole lavender tracked me down while i was freewheeling around 2030p. kept asking me when i was going to stop and fix the universe. maybe the universe should stay broken, okay? maybe i don't want to fix it. how come no one ever asks me what i fucking want!!

i want to see my fucking family.

merrryyyy christmas, fuckers. it took me months. years. but i can finally sort of control where and when i'm going. fuck yes. christmas gift for my fucking self. also nadia got me a bike, which is cool. and manuel stopped grounding me for the last who knows how many years and i'm allowed to roam the labs as i please. nadia if you're reading this. i didn't steal anything. pinky swear. (yet)

part of me is always going to be really, really glad nadia never told about my friends. cause that means i don't have to tell about what happened. i think nadia can tell though. it's so difficult to write. doctors said my wrists were fractured, by a bat or something... what they don't know, it won't hurt them. it's not like i heal slow. but i hate that you kept me there. that you didn't let me leave. annalise, i won't tell them. i know you're hurting, too. and i hate this place, and i hate what you did to them, and i hate them for even believing you. but i can't let this one time... change how i feel about them. about this mission. about you. and i know the old you is still there, aren't you? i know, because katie wasn't there. that, or you changed so much you forgot her. if you're trying to kill me, try harder.

i didn't get to carve pumpkins with them. but i did it myself!!! i think it's kind of cute. i'm not really an artist like katie is... i wish i could show them. i hope they're okay. leaving things like that, i really wish i didn't... i'm stupid. i shouldn't have told them about my powers. i should've just... left quietly. or something. i made it worse this time. so, so much worse. but its okay. they're going to be fine. 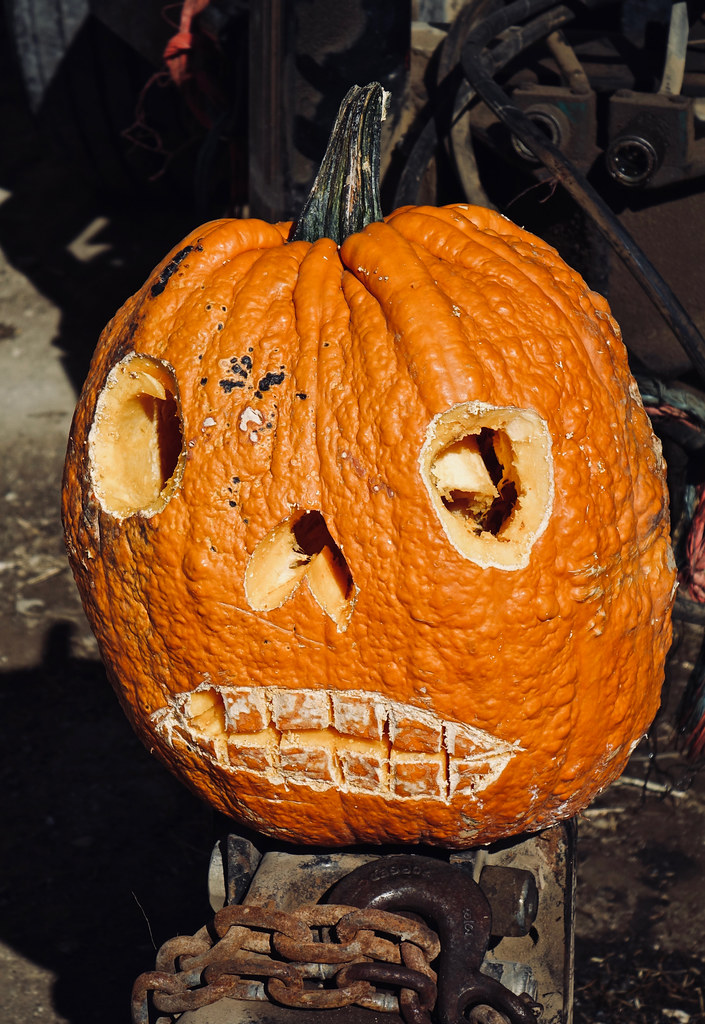 manuel kept asking me if i've seen annalise whenever i've slipped. if i had why would i keep my fucking mouth shut about it. this is the fourth time this week. i'm exhausted. nadia was nice enough to bring me things from the outside again. i don't know how she can keep up her lie about her homeschooled kid, but no one really asks questions out there. i like that movie, little shop of horrors. and she painted my nails again; blue this time. she makes me miss momma so much. and katie, too. katie. i can't stop thinking about how i want to see her. to let her know i'm fine. but it's still too early. but even then, what am i going to do? i can't break her heart then.

it hurts so much. the jumping. the more i do it, i think it gets easier. but i don't want it to get easier. i wish i could fail. they wouldn't need me so much if i failed more right? if i just didn't do it right. but i hate what i saw this time. they were so different, so quiet. it was like they knew i didn't belong there, and i couldn't tell them that we were friends in another place. another time. it was like they knew what i had done. i never want to go back. i wish i could know, somehow, the names of places i've been. nadia gives me this list, but it doesn't make any sense. letters and numbers. is that all anything is here? letters and numbers.

i keep forgetting i can write in this now. dr. nadia assures me this is private, but i don't think i can believe her. nothing about my life has been private here. ever since i sprung up... it's been quite a few years, hasn't it? time gets so lost in this lab. i wish i understood what they were doing here. this heliocorp. nadia won't tell me, and it's not like i can just ask anyone else... no one comes around here except nadia. and manuel. but i hate manuel.

dr. nadia said I'm old enough now to use this diary properly. but she thinks its important we keep everything from before. dear diary ? i'm kendra smalls. i'm 12. which is, weird to say because i was, what ? three yeears old ? in the B universe. or the A universe. i don't know how to keep track of them, still. i try to write myself notes... to remember. but even when i think i understand, i still... don't have it quite right.

i won't forget you.

annalise took me to the park. and i made frends. i hope i can see them soon. becus were runnin away toogeter! and i'm gnna run so far i'll see my big sister agan with my frends and well be happy. togerther.

i'm not suposed to be using this. dr. nadia says i cant until i'velearned how. how to deal with this all. its scary tho. i dont understand at all what theyre doing. or what penny is. or why those men keep coming back. she says im specal. i don't want to be

i went somwhere else. i came back and i wrote it down but it was too much. it was here, but it wasn't. everyone's eyes gliterred pink. that's not our world. nadia called it 4735k. i don't know what that means. she says its another univirse.